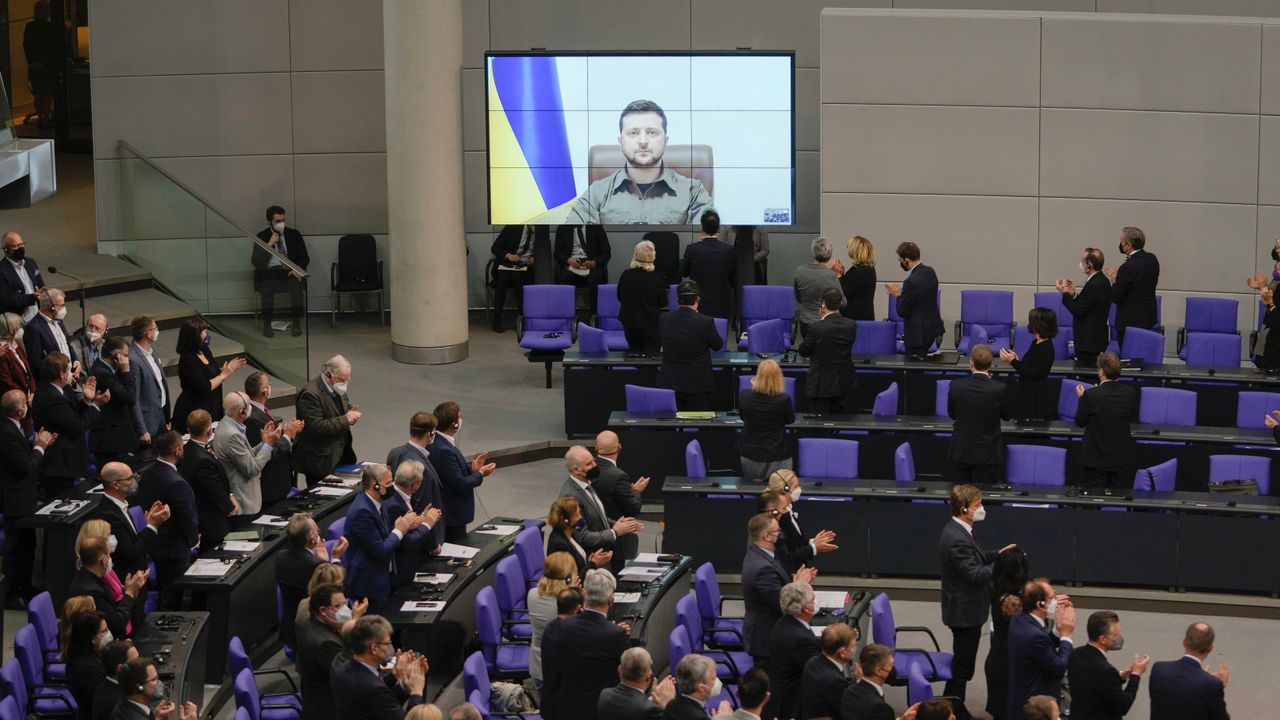 Ukrainian President Volodymyr Zelensky addressed the German Bundestag (parliament) on Thursday via video link. His speech was an appeal to the worst traditions of German history.

80 years after the German war of extermination against the Soviet Union, which claimed the lives of 27 million of its inhabitants, he accused Germany of not acting aggressively enough against Russia, where memories of the terror of the Wehrmacht Hitlerite (army) are still very much alive. .

By sticking to the Nord Stream 2 gas pipeline in the Baltic Sea for so long, by refusing preventive sanctions against Russia and by refusing to admit Ukraine into NATO, Germany has contributed to isolating its country and hand it over to Russia, Zelensky accused the assembled parliamentarians, who he said lacked “strength” and “leadership”.

He invoked Cold War anti-communism, accusing his audience of hiding behind a wall – a “wall in the middle of Europe, between freedom and unfreedom”. He quoted US President Ronald Reagan, who shouted at the Berlin Wall: “Tear down this wall! He called on Chancellor Olaf Scholz: “Destroy this wall. Give Germany the leadership it deserves.

Zelensky demanded the imposition of a full trade embargo on Russia and more direct NATO involvement in the war effort, even if it means risking World War III.

The day before, he had already called for the establishment of a no-fly zone over Ukraine in a video address to the US Congress. He repeated this request to the Bundestag. Germany must help secure the skies over Ukraine and prevent Russian air attacks, he said.

“Apart from the fact that there would be no UN mandate for no-fly zones, a no-fly zone would amount to a declaration of war on Russia,” he said. “To ensure that NATO fighter jets are not shot down, Russia’s air defense systems should first be withdrawn. Even if it were to succeed, aerial battles would follow. NATO and Russia would be at war with each other and on the brink of nuclear war.

Nevertheless, demand is gaining momentum in the United States and Europe.

In the Bundestag, Zelensky did not even hesitate to invoke the victims of Nazi terror to justify it. “I speak to you on behalf of elderly Ukrainians, the many survivors of World War II, who managed to save themselves during the occupation 80 years ago. Of those who survived Babi Yar,” he said.

On September 29-30, 1941, in the Babi Yar gorge, the Wehrmacht had slaughtered 34,000 kyiv Jews – men, women and children – in 36 hours. The victims had to lie on their stomachs on the corpses of those already murdered before they themselves were killed. The mass murder was part of a strategy to create a “Lebensraum” (“living space”) for German settlers in the East. It was the prelude to the systematic murder by the Nazis of millions of Jews, Communists and Red Army soldiers.

If Zelensky had recalled these crimes against humanity to ask the German government to work for an immediate ceasefire, that would have been understandable. Instead, he asks them to pour oil on the fire and show “leadership”.

The Bundestag thanked him with a standing ovation. From the Left Party to the far-right Alternative for Germany (AfD), where there are many neo-Nazis, all the deputies stood up. Even longtime AfD leader Alexander Gauland, who calls Hitler and the Nazis “bird shit” in Germany’s thousand years of glorious history, cheered.

For Germany’s ruling elites, the war in Ukraine is a welcome opportunity to realize the rearmament and great power plans they have long been planning. In February 2014, Frank-Walter Steinmeier, then foreign minister and now German president, was directly involved in the right-wing coup that sowed the seeds for the current war. He met in kyiv with Oleh Tyahnybok, leader of the far-right Svoboda party, among others. The same month, the German government announced the “end of military restraint” and its intention to once again play a role in world politics commensurate with Germany’s economic weight.

This return to militarism is accompanied by a revision of German history. The Spiegel published the article “The question of guilt divides historians today”. Historian Jörg Baberowski of Humboldt University testifies that Hitler was “not cruel”. And defended Nazi apologist Ernst Nolte, who described Nazism as an understandable reaction to Bolshevism.

“The revival of German militarism requires a new interpretation of history that trivializes the crimes of the Nazi period,” wrote the Sozialistische Gleichheitspartei (SGP) and its youth organization IYSSE at the time. Because they criticized these and other similar statements by Baberowski and opposed the return of German militarism and fascism, they were violently attacked by the university administration, the media and all parties and put on the list of “unconstitutional” organizations by the Office for the Protection of the Constitution.

If Zelensky is now also calling on Germany to return to its militaristic traditions and play a “leading role”, it is not a misunderstanding. Ukrainian nationalists like Stepan Bandera, who collaborated with Hitler’s Wehrmacht in World War II and participated in his mass murders, are highly regarded in Ukraine. They are publicly honored with monuments and commemorations.

Ukrainian Ambassador Andriy Melnyk, who sat in the public gallery of the Bundestag during Zelensky’s speech, had just the day before publicly defended the Azov Battalion, made up of right-wing extremists and wearing Nazi symbols on its uniform. “Please stop demonizing the Azov Battalion and playing propaganda – now also in the midst of the RUS extermination war,” he wrote on Twitter. “These brave fighters are defending their homeland, especially the besieged city of Mariupol. Leave them alone.”

Melnyk’s protest was directed against an article by Die Zeit who had described the far-right troops as “military-trained neo-Nazis with combat experience, with bazookas and assault rifles” who were “unlikely to simply submit again to a democratically elected president” once the conflict is over.

The Kyiv government’s sponsorship of fascist groups does not justify Russia’s reactionary military attack. But it exposes the lie that the war is about democracy and freedom, and shows that the main responsibility for the war and the suffering of the Ukrainian people lies with the NATO powers.

Since the dissolution of the Soviet Union in 1991, these powers have pursued the goal of eliminating Russia as a geostrategic rival and gaining access to its vast raw materials and lands. To defend their position, they waged wars in Yugoslavia, Afghanistan, Iraq, Libya and Syria in violation of international law and expanded NATO ever further east.

In Ukraine, which is economically and culturally closely tied to Russia, they deliberately promoted right-wing nationalists and neo-Nazis. Since the right-wing coup of 2014, which they supported and promoted, they have systematically rearmed the country, injected billions in weapons and trained its army.

The current conflict is a proxy war between Russia and NATO, waged on the backs of the Ukrainian people and funded by NATO. In the recently passed US budget, $14 billion was earmarked for Ukraine, twice as much as its own military budget. Since the start of the war, $550 million has been spent and President Biden has already released an additional $800 million. Other NATO members are also flooding the country with military aid and weapons.

For the German government, the war is a welcome opportunity to launch the biggest arms campaign since Hitler. The danger of the war spiraling out of control and leading to a Third World War is growing day by day. It can only be stopped by a workers’ offensive that unites the workers of all countries in the struggle against capitalism.