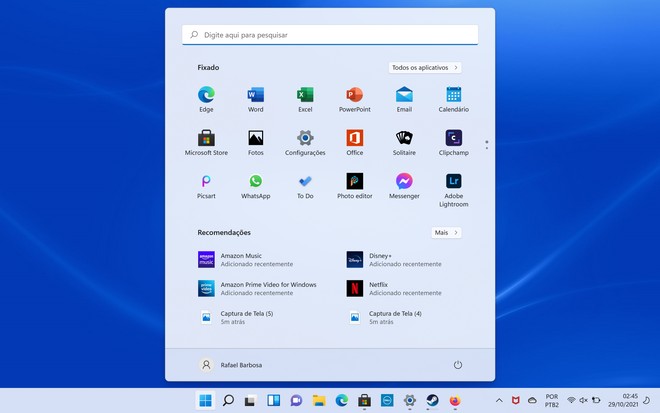 In early October, Microsoft launched Windows 11 in Brazil, the new version of the computer operating system. It is distinguished by the introduction of visual changes and new features for users.

But is its experience better than its Windows 10 predecessor? What can the platform bring to users? TudoCelular has borrowed a new XPS 9310 from Microsoft and Dell to test the system and let you know the details.

One of the most notable new features of Windows 11 is its more centralized design. In the taskbar and the start menu, they have now moved from the left corner to the center.

You can always go back to the traditional settings in Settings, but the proposed design now looks a lot more functional. Mainly because the Start menu no longer has Live Tiles and has started to offer a cleaner organization.

At the top are the apps installed for faster access without having to adjust sizes, making it easy for you to find what you need. At the bottom are the latest open programs, which can make your life easier so you don’t go looking for the urgent.

To access the All programs menu, there is a button above this first group. The menu also has a search bar, so it’s easy to find the app you want to launch.

Instead of Live Tiles, Microsoft preferred betting tools. It is accessible from the dedicated button on the taskbar and displays cards on the left side with information that may be of interest to you.

The options are customizable. You can place cards with news, weather, game scores and more alternatives. The only problem here is that if you decide to click on any widget, it will necessarily open in Microsoft Edge, regardless of your default browser. 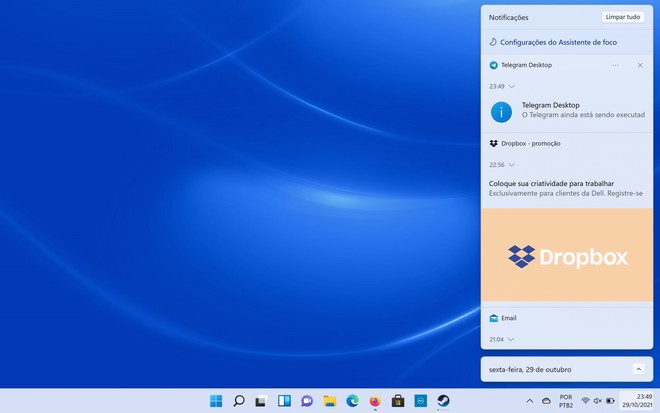 On the other hand, the notification bar can be moved to the right corner or when clicking on the date / time, without the dedicated button on the side. However, options to turn on Bluetooth, adjust brightness, or turn on Airplane mode have been incorporated along with the Wi-Fi and sound icons, as well as accessibility in settings, which now provide a more intuitive look. However, it seems that the Windows 10 model was more practical than the new one. 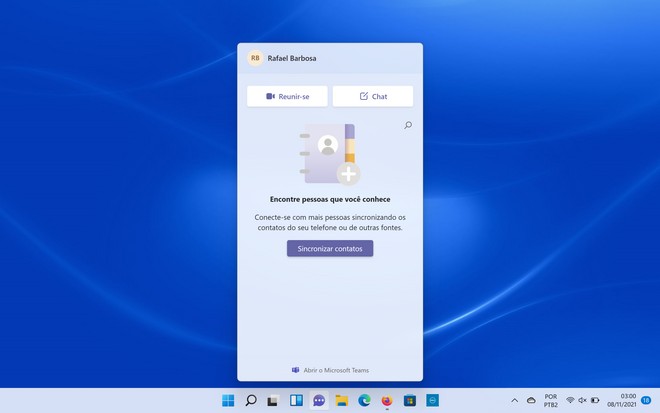 Another new feature here is better integration with Microsoft Teams. The Redmond giant appears to be well engaged in promoting its video conferencing platform by making it look more like a regular messenger – like WhatsApp or Telegram.

The new Teams reminds us more of MSN Messenger of the past, in that it integrates your Microsoft messaging and suggests discovering your contacts and starting a conversation with them via chat, without the video scheme that became popular last year. 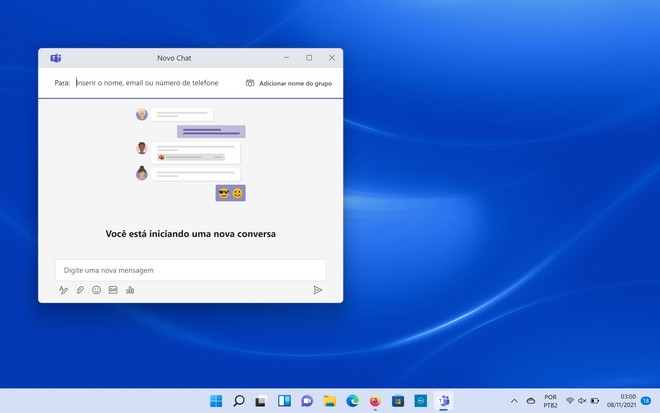 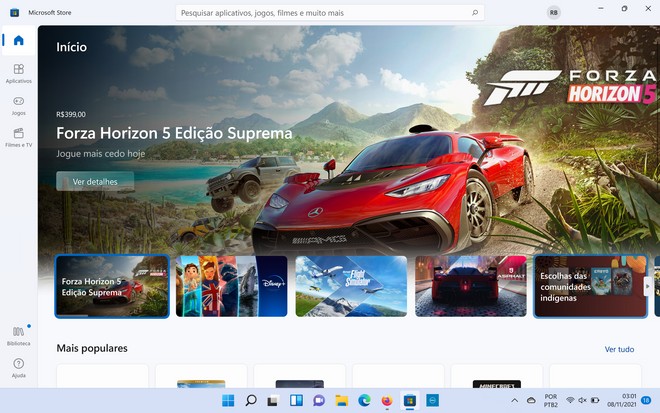 Windows 11 still has a revamped Microsoft Store. The store lost that sticker aspect and introduced better organization into categories – apps, games, and movies, for example – with access even to web apps.

Gradually, the American multinational encouraged its users to download software through its official store, instead of downloading browser-operated installations. The result is an expansion of the apps available out there, but there is still a long way to go before it becomes a favor with users. 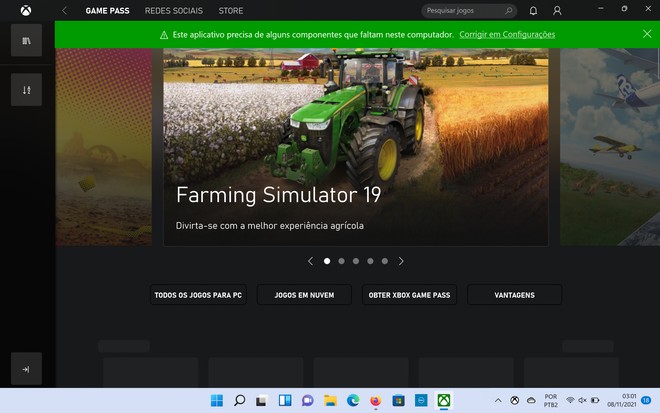 One of the categories we mentioned above is games. Microsoft aims to integrate console and PC games with a number of features. One of them is the Xbox app, which is now integrated with Game Pass and you can even play cloud games through xCloud.

The app has already offered these features since Windows 10, but we feel a lot smoother playing on 11, even when it’s not running from the cloud, but being downloaded from your computer’s storage. . 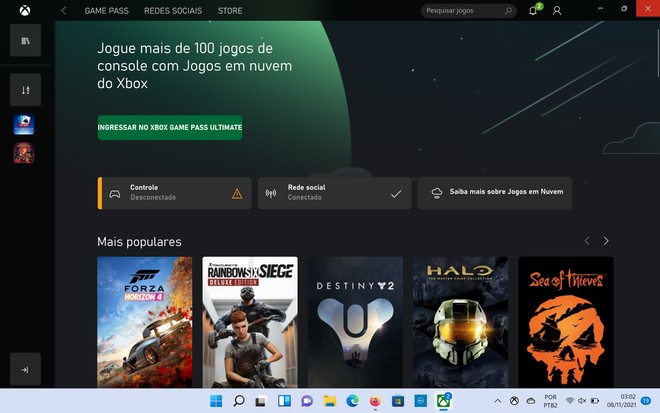 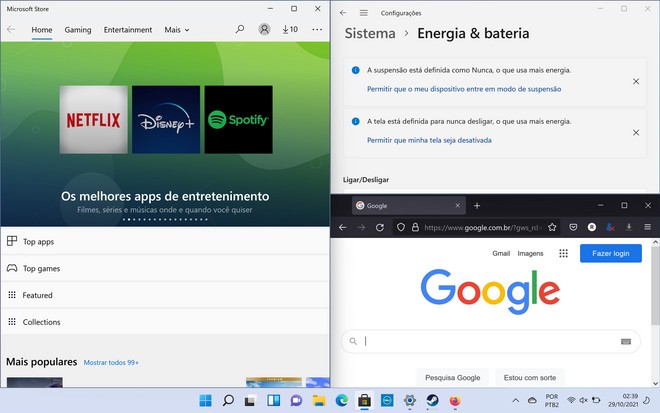 And how does Windows 11 behave at work? Here are some of the new tools aimed at increasing user productivity. One of them is the call Capture layout, a function available when you move the mouse arrow over the Maximize Window button.

It allows three or even four windows open at the same time and of different sizes to be distributed on the screen. This is especially useful for anyone using multiple tabs simultaneously. In the case of ultra-high resolution monitors, you may be more interested in the three vertical window layout. 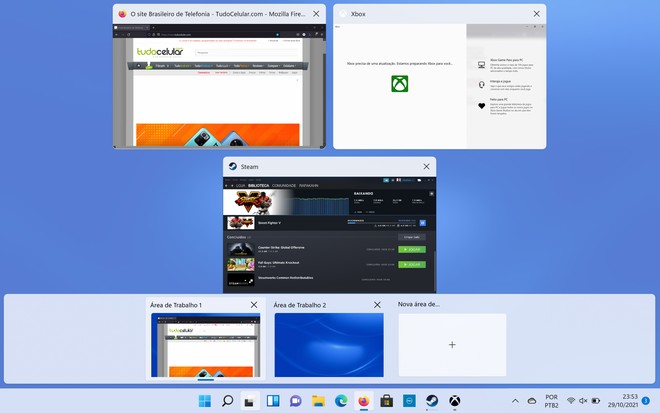 In addition, the Task View button places more value on the ability to create additional desktops, not just open windows. This makes it easy to switch between them, according to your preferences.

Since this site tested it on the best Dell XPS 9310, the device’s touchscreen also gave an idea of â€‹â€‹how to use Windows 11 via to touch. Contact. Connect. It is an experience for some, but it is easy to use the system this way.

Accessing side menus while scrolling and gently dragging windows to organize them on the screen makes touching a good alternative to the mouse in Windows 11.

What are you waiting for in the future? 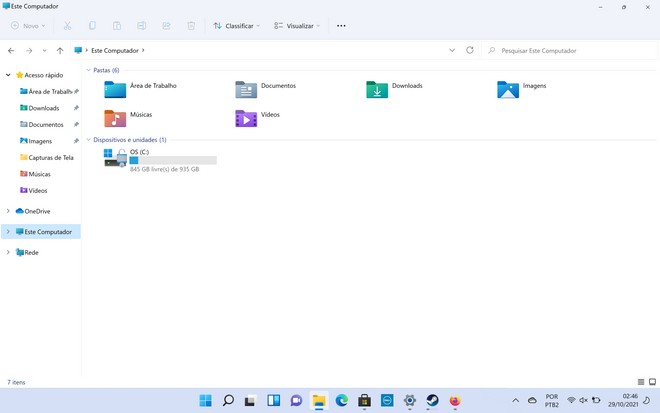 Although many features have already shown constant evolution from Windows 10 to Windows 11, there are still some features expected in the platform of the future.

One of them is to implement a tab system for a file explorer. So, opening folders will have a similar experience to running multiple websites in the same browser, with a single window open in the taskbar.

Another expected novelty, but still in the testing phase, is the presence of support for Android applications, in partnership with Amazon. Perhaps only then will users get a taste of installing software through the Store on their PCs, even without the Microsoft Store – which can therefore be used “on schedule”.

Since Microsoft will only update its new operating system with one major update per year, the trend is that there will be fewer issues releasing a new version, compared to biannual instances of Windows 10. – the company will now have a full year to work on changing just one.

However, be careful of other errors that may arise due to incompatibilities with components or for various reasons, especially at this first moment. Some flaws have already been discovered in Integrated applications, job Printer installation, job No start menu running Excessive RAM consumption.

For the company, the success of Windows 11 will include resolving problems already detected as quickly as possible and making the new system as “rounded” as possible, encouraging the public to stick to it without fear.

Is it worth updating? 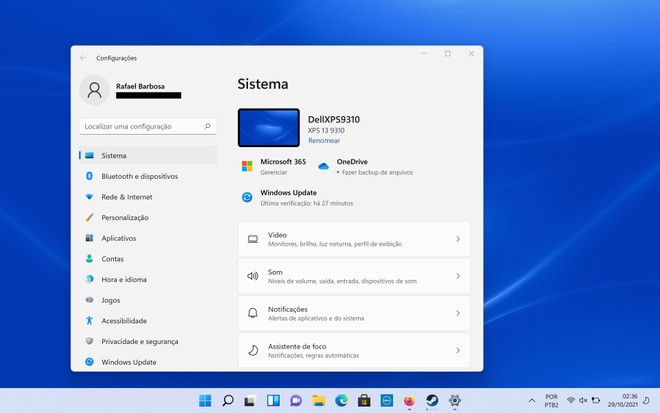 Windows 11 is undoubtedly a good upgrade over its predecessor, but the question remains: is it worth upgrading now? I would say preferring the original 11 seems like a better deal for anyone looking to buy a new PC – be it a desktop or a laptop – than migrating from 10 now.

Updating is not as easy as it looks and requires a series of compatibilities to make the installation more secure. Especially since the expected “slices” of the platform are not yet in place.

However, Windows 11 deserves the attention of users to make the change in time. The experience tends to improve in almost every way, from entertainment and apps and games to productivity for business use.

What are your thoughts on the new Windows 11? Have you updated your computer to the latest version of the Microsoft operating system? Share with us!

How to choose a website that provides Dominican online dating services?