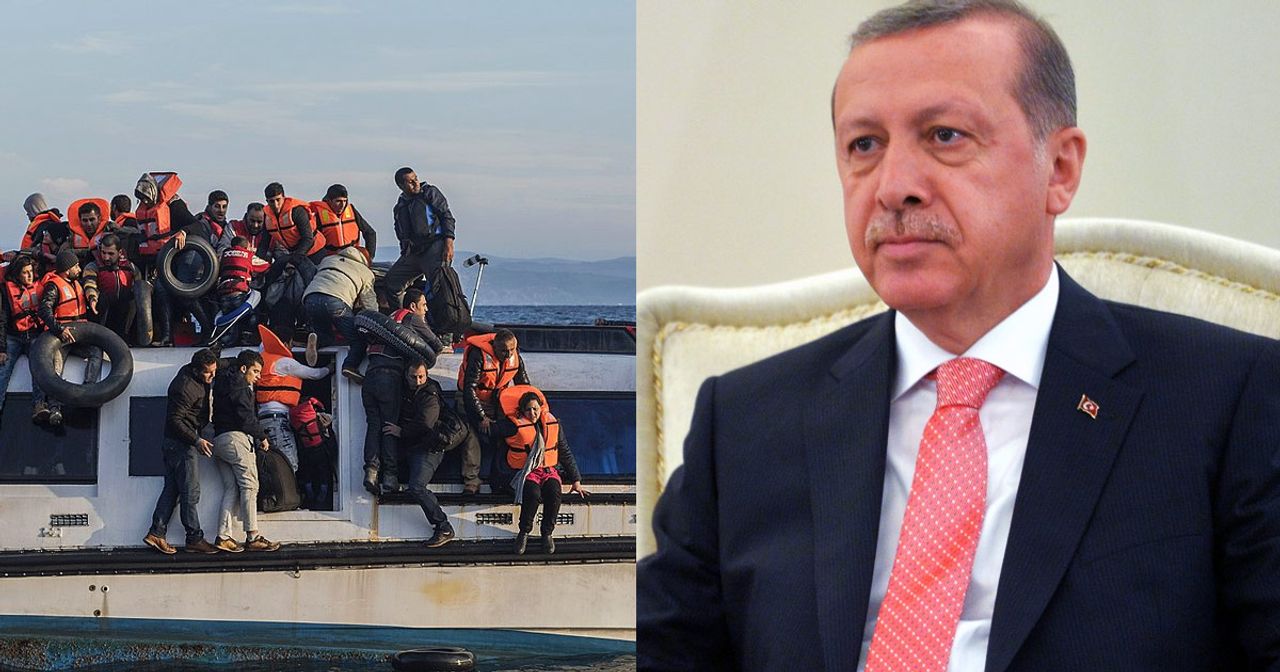 Speaking via a remote connection at a conference in Idlib, the northwestern province of Syria occupied by Turkish forces and their Islamist proxies, Erdoğan said: “We are preparing a new project to enable the voluntary return of a million Syrian brothers and sisters whom we have welcomed into our country. We will implement this project with the support of national and international non-governmental organizations.

He added: “Around 500,000 Syrians have returned to the safe areas created since 2016, when Turkey launched its cross-border operations amid a worsening humanitarian tragedy in Syria.”

The “humanitarian tragedy” that Erdoğan speaks of is actually the product of the imperialist war between the US and NATO, which the Turkish government has supported since 2011, to overthrow the Russian-Iranian-backed government of the Syrian president. Bashar al-Assad. Turkey invaded Syria not to end the humanitarian catastrophe it had helped create there, but to prevent the emergence of a US-backed Kurdish nationalist enclave.

Contrary to Erdoğan’s claims, the deportation would not be “voluntarily” chosen but imposed on the refugees, due to the far-right anti-refugee campaign and dirty deals with the European Union. It is understandable that the vast majority of refugees do not want to return to Syria, where the war continues. Refugees who want to enter Europe are blocked at the borders with Greece and Bulgaria and sent back to Turkey.

They do not even have the legal status of “refugees” in Turkey. They live in misery, deprived of fundamental rights, subjected to uncontrolled exploitation and targeted by the extreme right. the World Socialist Website rejects this campaign and stresses that it is essential for the international working class to defend the democratic rights of refugees in struggle against the bourgeoisie. In the case of Turkey, this means full citizenship rights for refugees and access to education for Arabs and Kurds in their mother tongue.

The far-right campaign against refugees in Turkey has intensified in recent weeks, with politicians and pundits promoting anti-refugee hashtags on Twitter. Chauvinistic comments are increasingly frequent in the bourgeois press and the pseudo-left.

The entire political and media establishment scapegoats refugees and immigrants in Turkey and abroad, as the bourgeoisie and affluent middle class lack a progressive response to the growing economic and social crisis. The ruling class is bolstering fascist movements by taking up the old reactionary weapon of chauvinism to divide the working class and hijack growing social opposition.

The vast majority of Turkey’s population lives with high inflation, unemployment and growing poverty, as the pandemic continues and the danger of a world war increases. And the ruling class is getting rich at the expense of workers’ health, lives and wages.

Throughout the pandemic and now the war in Ukraine in which NATO sanctions against Russia have disrupted global supply chains, already unbearable food prices and poverty in Turkey have risen even faster. . The demonstrations and strikes that erupted in January and February were only the first expressions of growing social unrest.

Today, the establishment parties are spreading the lie that the cause of all the problems stemming from the capitalist system and bourgeois rule are the refugees. Kemal Kılıçdaroğlu, the leader of the pseudo-left-backed Kemalist Republican People’s Party (CHP), criticized Erdoğan’s plan to deport 1 million refugees to Syria from the right. Adopting far-right rhetoric, he said: “Go ahead! There are still streams of fugitives coming from the border. We’ll send the rest in two years, and we’re all sick of your bogus plans.

Right-wing parties like the Fascist Nationalist Movement Party (MHP), the main ally of Erdoğan’s Justice and Development Party (AKP), as well as the CHP’s partners – the Good Party, DEVA, the Future Party and the Happiness Party – also call for the expulsion of refugees from Turkey.

This bipartisan attack on helpless refugees, who are an integral part of the working class, is clear proof that the CHP and its pseudo-left allies are no less reactionary and hostile to the working class than the Erdoğan government.

However, most prominent in the anti-refugee campaign recently has been the Victory Party (Zafer Partisi). Founded by Ümit Özdağ, who left the far-right Good Party, this middle-class party sees refugees as Turkey’s main problem and is campaigning hysterically for their expulsion. He claims there would be a civil war in Turkey if the refugees remained in the country, and he has started to rally far-right circles around him with his furious campaign.

On April 19, Özdağ announced a “Fortress Anatolia” project to send refugees back to their country. This is a reference to the European Union’s Fortress Europe policy, which aims to prevent refugees from the Middle East and Africa from entering Europe. This policy has already caused thousands of refugees to drown in the Mediterranean Sea and turned Turkey and Greece into refugee prisons.

Additionally, a short film named Silent Invasion, broadcast on journalist Hande Karacasu’s YouTube channel on May 3 and personally funded by Özdağ, further intensified the anti-refugee campaign. Karacasu’s fascist film, full of distortions and lies, quickly rose to the top of the press and social networks. More than 3 million people saw it in three days on YouTube.

According to the film’s script which seeks to exploit the racial fears of the affluent middle class, Arabs become the majority in Turkey in 2043. The Turkish minority is exposed to oppression, discrimination and violence. Most young Turks are unemployed and a small number of them consider themselves lucky because they have a job. State administration passed into Arab hands, with Arabic becoming an official language. The Turkish language and culture are destroyed.

Shortly after the film’s release, the Turkish National Police issued a press release, fearing the situation was spiraling out of control. The statement announces that Hande Karacasu and the user of the Twitter account “Militer Doktrin” have been arrested and legal proceedings have been brought against them for manipulation. Karacasu was released the following day.

These far-right provocations have already led to killings of refugees and attempted pogroms by far-right elements. Three Syrian refugees were burned to death in Izmir last November and a far-right mob raided a Syrian neighborhood of Ankara in August.

The events in Doğankent, a district of the southern city of Adana, on May Day are another serious warning. After a dispute broke out between Syrian refugees and Turkish citizens, attacks were reportedly carried out on the homes of Syrians and four people were reportedly injured.

The way forward against the growing far-right and anti-refugee campaign is through the fight for international socialist unity of the working class, rejecting all forms of chauvinism and nationalism. This means building the Socialist Equality Party as the Turkish section of the International Committee of the Fourth International (ICFI), the only political tendency in the world to uncompromisingly oppose the anti-refugee campaign.