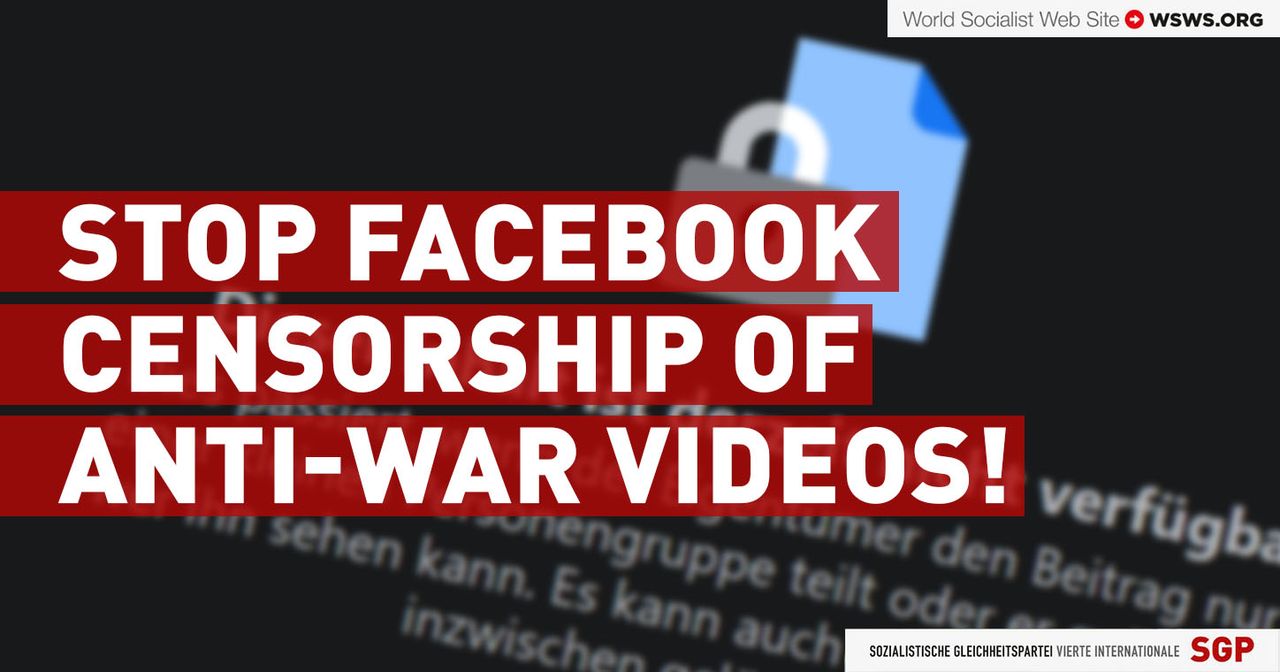 On Saturday, Facebook deleted a video posted by the Socialist Equality Party of Germany opposing the German government’s involvement in the US-led NATO proxy war against Russia in Ukraine.

The video, titled “No World War III! Against the war in Ukraine, NATO aggression and German rearmament! places the conflict in Ukraine in its historical and political context. It was seen by 20,000 people before being deleted.

The Sozialistische Gleichheitspartei (Socialist Equality Party, SGP), which produced the video, wrote to Facebook demanding an explanation for its actions. The SGP has not yet received a response.

There is no innocent explanation for this action by a company that earlier in the war changed its guidelines to allow users in certain countries to post calls for violence against Russians. It is an act of political censorship directed against anyone who opposes war and militarism.

Facebook’s actions expose the official narrative that the war in Ukraine is about defending “Western democracy” against “Russian authoritarianism” as a propaganda lie. Indeed, the ruling class in the imperialist countries increasingly resorts to repressive measures because it fears the growth of working class opposition to its murderous policy in the interests of the rich.

The repression of opponents of war has a long tradition in Germany. During the Franco-Prussian War, the two labor leaders August Bebel and Wilhelm Liebknecht were imprisoned in December 1870 because they demanded peace without annexation to the Reichstag. During World War I, Rosa Luxemburg and Karl Liebknecht served long prison sentences. Carl von Ossietzky, a prominent opponent of German militarism, was sentenced to 18 months in prison in 1932, even before Hitler took power, for discovering the secret rearmament of the Reichswehr. After another six years of Nazi terror against the working class, the Nazis launched a new world war, leading to the greatest crimes in human history.

Opponents of the war in Germany are again censored because the NATO powers are de facto in a state of war. As the censored video shows, NATO has long been a war party in Ukraine. It deliberately provoked the reactionary Russian invasion and continually escalates its aggressive threats against Russia. “The Ukrainian people are being sacrificed like pawns to advance NATO’s confrontation with Russia. This confrontation, which can quickly lead to nuclear war, is now escalating with breathtaking intensity,” the video reads.

Last weekend the video was deleted as US President Biden announced a “decades-long” “fight” and openly stated that the goal of US foreign policy was regime change in Russia. German Chancellor Olaf Scholz made a similar statement when he defended on television on Sunday the tripling of Germany’s military budget, saying Germany must once again be able to wage war on Russia. The speed with which the NATO powers are moving towards a world war is staggering.

The video is a thorn in the side of the ruling elite as it breaks official propaganda and explains the true background and circumstances of the war. It shows that the main causes of the war policy of the imperialist powers are the fundamental contradictions of capitalism.

After the dissolution of the Soviet Union, the United States sought to establish its global supremacy. In countless wars in Iraq, Yugoslavia, Afghanistan and many other countries, any threat to US hegemony had to be eliminated, the video explains. For its part, German imperialism has reacted with a return to militarism and is now arming itself with alacrity. The acute danger of a third world war is the consequence of this policy.

The video concludes that the fight against war requires a fight against its roots, capitalism. “A catastrophe can only be avoided by an international movement of the working class against capitalism,” he explains.

Such a socialist perspective against the war is forbidden in Germany. Anyone who opposes the pervasive and deafening propaganda of war must be silenced. But as always in history, such a reaction is not an expression of strength, but of weakness. Censorship of opponents of war is a desperate response to growing working class opposition to warmongering.

The push towards war exacerbates all social contradictions. Food and energy prices are already rising rapidly due to the war in Ukraine and sanctions against Russia. Disruption of supply chains leads to temporary layoffs and layoffs in German industry. The ruling class is stepping up its ruthless “profits before life” policy in the pandemic, which has seen governments let COVID-19 run rampant, turning to war. Such a policy is incompatible with democratic rights, which is why censorship and repression are increasing.

Tech companies work closely with the governments and state apparatus of the major imperialist powers. Facebook alone has hired more than 20,000 employees for its security and enforcement team to monitor and censor posts on its platform. Many of them are “former intelligence and law enforcement officials,” Monika Bickert, Facebook’s counterterrorism chief, acknowledged in January 2018.

In Germany, more than 1,000 people are employed to monitor content on Facebook. Cooperation with the government is particularly close. With the Network Enforcement Act, the federal government turned big tech companies into de facto internet judges who can independently decide on content censorship and are even encouraged by the threat of steep fines to remove more content rather than less. Hundreds of thousands of posts have already been deleted based on this law.

The current censorship of the SGP’s anti-war video is directly linked to the federal government’s attempt to criminalize the SGP and, with it, any socialist perspective.

In 2018, the Federal Interior Ministry included the SGP for the first time in the report of the Verfassungsschutz, Germany’s secret service, and defamed the party as a left-wing extremist. This decision was later justified on the grounds that the “struggle for a democratic, egalitarian and socialist society” and “agitation against so-called ‘imperialism’ and ‘militarism’” were unconstitutional. The Berlin administrative court followed this line of anti-democratic argument in its first-instance decision last December on a lawsuit brought by the SGP against its inclusion in the Verfassungsschutz report. Only a few months later, the antimilitarist videos are already censored.

These developments are not limited to Germany. In 2017, Google announced that it would give preference to “authoritative sources” in search results in the future. At the same time, socialist and anti-war sites, and in particular the World Socialist Website, were censored and banned from search results. Facebook tried twice last year to block ICFI pages and content but was forced to reverse its actions due to an outpouring of opposition.

The authoritarian and anti-democratic measures are not only aimed at the socialist perspective of the ICFI, but at any principled opponent of war. Julian Assange, a brave journalist who uncovered war crimes committed by the NATO powers, is subjected to continuous torture in Belmarsh maximum security prison and faces death threats if extradited to the United States. United. Critical journalist Chris Hedges, who has made a name for himself as an opponent of US-led wars, reported on Monday that all episodes of his YouTube show “On Contact” had been taken down without him be informed.

The fight against censorship and ruthless war policies must be based on mass opposition to a Third World War. It must give a voice and a socialist perspective to the deeply rooted hostility to imperialist war in the working class. We strongly urge all our readers to spread this article widely and to protest on all social media against censorship. Use the hashtags #defendSGP, #StopCensoringSocialism and #SpeakOutAgainstWW3 to distribute the video censored by Facebook.