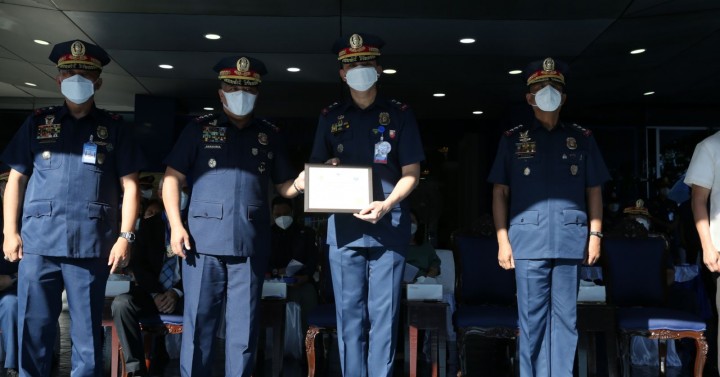 MANILA – The Logistics Directorate of the Philippine National Police (PNP) was recognized for its innovation of a central database of force logistics assets.

The management and its staff received an “Information System Proposal Recognition Certificate” and a “Medalya ng Katangi-Tanging Gawa” for its Logistics Information and Data Management System (LDIMS) during the rites of Monday flag raising at Camp Crame, Quezon City

The LDIMS is a one-stop-shop that maintains a central database that provides relevant information on all PNP logistics assets in real time, verifies personnel responsibilities, and provides easy access to clearance issuance for PNP personnel taking their retirement.

“As we look forward to the logistical challenges of the PNP relating to the local and national elections of May 9, 2022 and the post-election security scenarios, the PNP LDIMS is an advantage for the rapid mobilization of our troops and our means, in particularly in areas with a history of election-related violence,” Sermonia said.

PNP Director of Logistics Major General Ronaldo Olay said that the PNP has procured 17 different projects for a total amount of PHP 3,514,335,399 under its Capacity Building Program (CEP) 2020 and 2021 and led seven of the first 12 procurement activities for the CEP. 2022, which is beyond the 50% requirement of the Public Procurement Policy Board (GPPB).

Olay said last February 9 that the PNP NHQ-BAC presented Carlos with newly purchased equipment such as high-speed tactical watercraft, an all-new utility truck and medium troop carrier, and patrol jeeps, among others. .

Also on Monday, the PNP and the Stairway Foundation, Inc, (SFI) signed a Memorandum of Understanding (MOA) to provide a framework for cooperation and facilitate collaboration in promoting the prevention of sexual abuse and exploitation of children online and offline by employing training and tool development, as well as networking and raising awareness.

The forging of efforts between the two organizations took place at Camp Crame, Quezon City, with Sermonia representing Carlos.

SFI Executive Director Lars Christian Jorgensen was present at the signing of the MOU. (NAP)

We are committed to honoring all debts