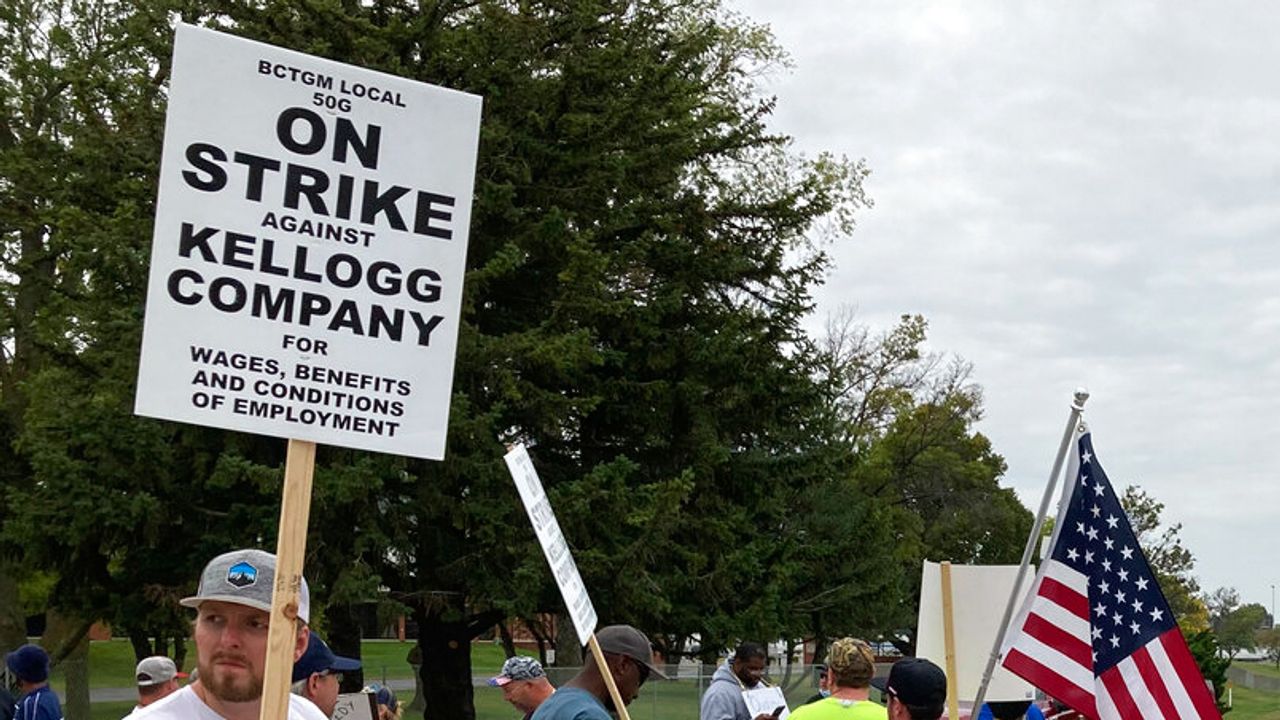 In a major escalation in its attack on strikers, U.S. food giant Kellogg’s said on Wednesday it would begin hiring permanent replacements for the 1,400 workers on strike since Oct. 5 at grain factories across the United States. business in Michigan, Pennsylvania, Nebraska and Tennessee.

In a terse press release, the company said it “has no choice but to best serve the short and long term interests of our customers and consumers by moving on to the next phase of our business plans. ’emergency.

â€œWe will continue to effectively manage our factories with hourly and salaried employees, third-party resources and temporary replacements, and now, where appropriate, hire permanent replacements. “

The company has been using temporary replacement workers almost since the start of the strike and has aggressively moved them through picket lines, which last month resulted in several strikers being struck by vehicles outside of the factory in Omaha, Nebraska. The management is also asking for a court injunction to allow a freer circulation of scabs and is working with the strikebreaker firm AFIMAC Global.

The company said negotiations with the International Bakery, Confectionery, Tobacco and Grain Millers Union (BCTGM) collapsed on Monday and are not expected to resume until December 6. While management claims to have proposed a plan to “graduate” workers with four years to higher pay scales, the BCTGM refused to sign, aware that they could not get such an agreement ratified by the grassroots.

The workers seek to overturn the two-tier wage and benefit system previously accepted by the BCTGM, which includes numerous pay scales for older “old” workers and 30% of the workforce stuck in a ” transition level â€with lower wages and benefits. On the picket lines in Battle Creek, Michigan and elsewhere, workers carry signs saying “Our future is not for sale,” expressing determination to fight for equal pay, pensions and benefits. retirement plans for the next generation of workers.

In 2013, the company locked out 200 workers at its Memphis, Tennessee plant for nine months after resisting the company’s demands to increase the number of lower-paid casual workers. The plant was then placed under the BCTGM framework contract, which included the two-tier system.

Workers who risked their lives during the pandemic are also struggling with excessive overtime, including 16-hour shifts and seven-day shifts that have robbed them of rest and family time. Ironically, Kellogg’s introduced a six-hour day for many of its workers in 1930 to create jobs for workers laid off during the Depression and to counter activists’ efforts to organize its factories.

The Battle Creek-based company and maker of cereal and snack foods Corn Flakes, Frosted Flakes, Rice Krispies, Special K, Pringles, Pop-Tarts and Nutri-Grain has global sales of $ 13.7 billion and is expected to earn more. due to the increased consumption of its products during the pandemic. It employs 31,000 people worldwide and operates manufacturing plants in 18 countries.

The BCTGM and the national labor federation AFL-CIO, however, left the 1,400 strikers alone to fight the global giant. In other struggles, such as the eight- and nine-month strikes by Warrior Met Coal miners and nurses at St. Vincent’s Hospital in Worcester, Mass., Unions have also isolated strikes, leaving workers vulnerable to scrappers. strike and corporate and state violence.

Kellogg’s workers began their strike last month, as workers engaged in what was becoming the biggest wave of strikes in generations. The AFL-CIO and its affiliated unions responded by ending the Deere strike, blocking the strikes of 3,500 Dana auto parts workers and 100,000 film and television production workers and Kaiser Permanente nurses. and other health workers. In all of these battles, unions have worked to defuse the social anger that has been mounting within the working class over wages and conditions since the start of the COVID pandemic.

The BCTGM website says nothing about this latest Kellogg’s attack. Its last press release was three weeks ago and was only 159 words long. Its online magazine attempts to cover up the powerlessness of union officials by presenting a very distorted view of the October strike wave, with BCTGM chairman Anthony Shelton writing: â€œKellogg workers, like their brothers and sisters sisters of Frito-Lay and Nabisco, say: “Enough is enough”. The workers get up. We refuse to settle for less. And we use all the tools at our disposal to win what’s right.

It is not said that Shelton’s colleagues in the AFL-CIO worked hand in hand with employers to bring this wave of strikes under control. The fate of the Frito-Lay and Nabisco workers (also represented by the BCTGM) is also overlooked, and they have not followed through on any of their demands to dismantle two-tier pay scales, recover decades of lost wages. real and end the ten and twelve hour days.

The Kellogg strike is at a critical crossroads. Auto workers, healthcare workers and others cannot allow the company to conduct a strikebreaker operation at PATCO, which would set a precedent to be used against all workers. But the struggle cannot be left in the hands of the BCTGM and other corporate unions.

Kellogg workers should form a grassroots strike committee to advance their own demands, including the immediate abolition of the two tier wage and benefit system, substantial wage increases to make up for years of lost wages , the reestablishment of the costs of living payments (COLA) to combat the ravages of inflation, and the reestablishment of the eight hour day. This committee should fight to expand the strike by calling on all workers in the United States, as well as Kellogg workers in Canada, Mexico and across its global empire, to take joint action to defeat threats from scabs. of the business and win their claims.