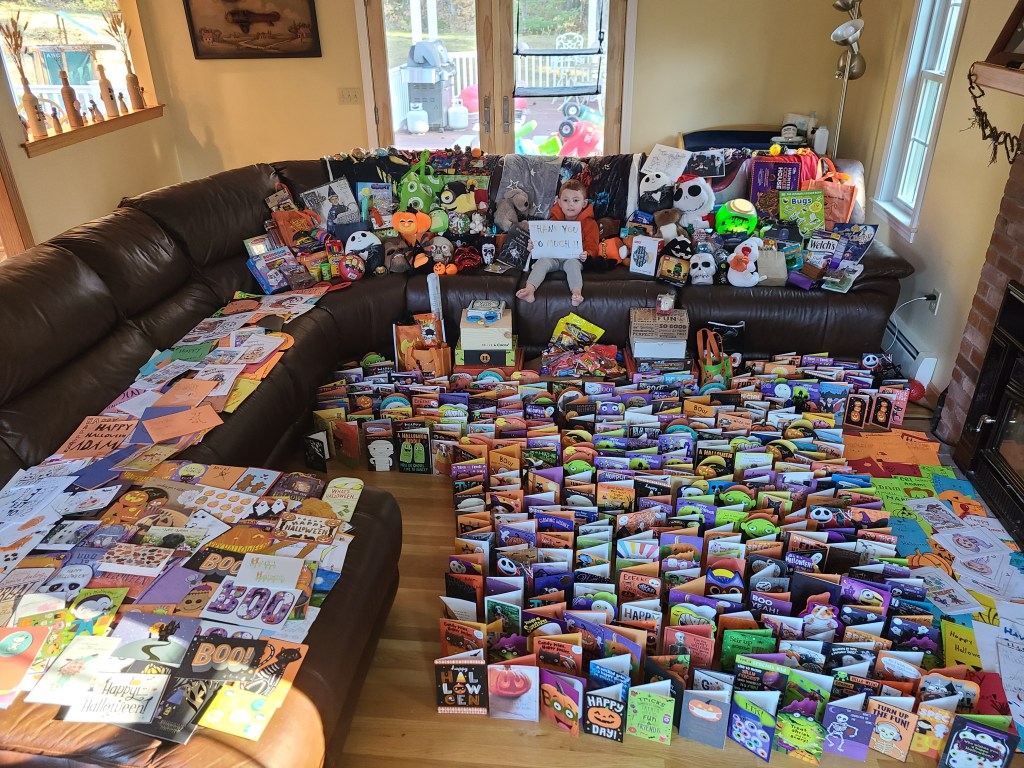 PEPPERELL – On October 21, Meaghan Luther posted to Facebook, asking friends to send postcards to his 5-year-old son Adam, who was soon to undergo brain surgery.

Within two weeks, Adam had received hundreds of cards and packages from friends, families and complete strangers, in town and as far as France, South America and Australia.

“I never thought it would be that big,” Luther said. “It’s been shared more times than I think. It has just bloomed.

Luther said that just before Adam’s second birthday he started having seizures, and although she and her husband, Alex, took him to the top doctors at Boston Children’s Hospital, no one could determine what caused them. The family tried 15 different medications, all with various side effects, but nothing seemed to help.

In 2021, Adam had hundreds of seizures every day. In May, he had his largest seizure cluster yet and began to pass out and feel weakness on the right side of his body.

Worried that he was the victim of a stroke, his parents rushed him to the emergency department at Tufts Medical Center, where they met their new doctor, John Gaitanis, chief of the pediatric neurology department, who said they would stop prescribing new drugs just to see what might work.

“All the right pieces fell into place without us even realizing it,” Luther said.

An MRI came back without anything abnormal, until neuroradiologist Neel Madan spent more than two hours studying it later in the week and found what he believed to be the problem: a small area on the side left side of Adam’s brain which seemed to be the source of the seizures. .

Without being sure, however, the Luther’s weren’t willing to give the go-ahead for invasive brain surgery. Over the next several months, they saw Adam’s condition worsen, as he struggled to sleep through the night due to seizures and had basic functioning issues.

“I watched this little boy get almost paralyzed on the right side,” Luther said. “He couldn’t hold a pencil anymore. He forgot the arm, and every time he washed his hands I had to tell him to wash the correct one. His leg would give way and he would fall.

Meanwhile, Luther was doing his best to find alternative treatments, trying to enroll Adam in research studies that might help him. Unsuccessfully, however, in September they contacted neurosurgeon James Kryzanksi, who specializes in epilepsy, and immediately accepted Madan’s previous analysis of the abnormality in Adam’s brain.

They scheduled the operation for October 25, but as soon as she made an appointment, Luther realized that there was a problem: it was way too close to Halloween, the favorite day of ‘Adam.

But without another meeting before January, they had no choice. After a final last minute MRI confirmed the location of the problem area, they prepared for surgery.

In the week leading up to October 25, Luther brought Adam in for a haircut, a creepy spider web shaved into his hair. On the day of the operation, operating room staff left a toy spider on the pillow where Adam would lie, along with a note that a friend was waiting for him.

Surgeons removed a small piece of Adam’s brain, and within 24 hours he was sitting in bed, playing on his tablet, and using his right hand. Within 72 hours, doctors said he was ready to return home to his parents and 2-year-old brother, Kyle.

“We haven’t had a silent EEG for three years,” Luther said. “This kid had hundreds of seizures every day for three years. They took out that cranberry-sized piece of brain and stopped everything. It’s incredible.”

When they got home, more than 50 packages were waiting for them, thanks to Luther’s Facebook post the week before. The post had been shared with local groups and far beyond, inspiring complete strangers to send Halloween candy and cards.

“Every day we were at home this week after the operation, the Amazon driver would come to the house four times a day, dropping off complete strangers packages,” Luther said. “They saw a friend of a friend on Facebook and were touched by Adam’s story and said, ‘This little boy deserves something. “”

As Adam heals, the cards keep coming. Luther said some of his favorite packages came from local classrooms and across the country, where teachers inspired by Adam’s story had their students handcraft cards for him.

Another touching part of the experience, however, was hearing from parents like her, inspired by Adam’s experience of continuing to fight for the health and survival of their own children.

“It’s nice to be able to give back a little and talk to other parents,” she said. “They can know that they are not alone, and there is hope that it will not always be like that.”

Website for meetings between producers and breeders. Today, all of our suppliers look to you for the never-too-distant future for this delighted reason.