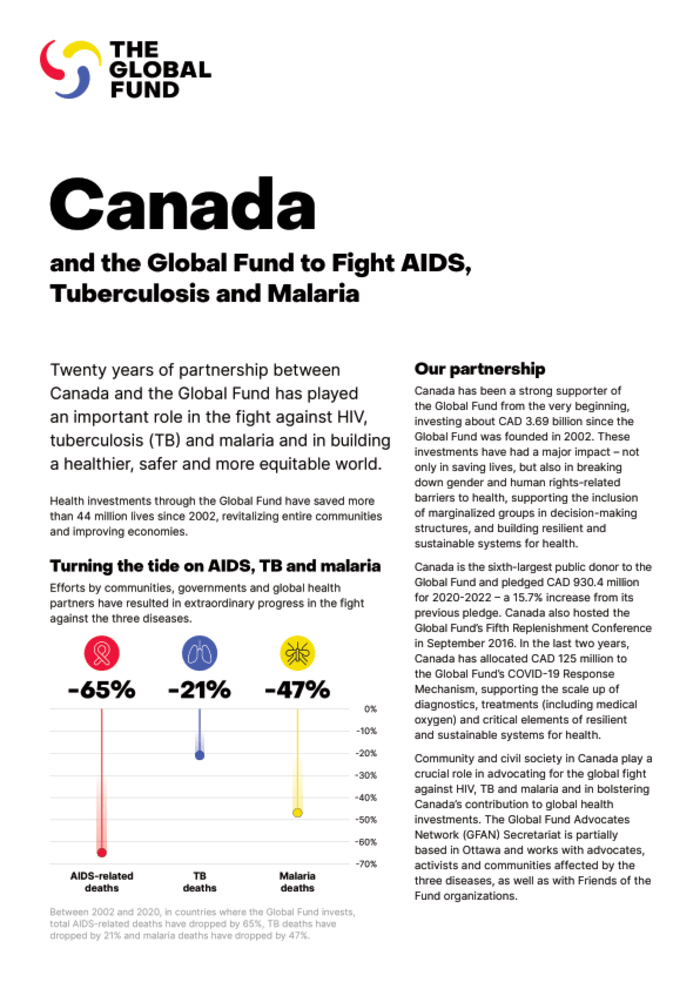 Canada and the Global Fund to Fight AIDS, Tuberculosis and Malaria (May 2022) – World

Twenty years of partnership between Canada and the Global Fund have played an important role in the fight against HIV, tuberculosis (TB) and malaria and in building a healthier, safer and more equitable world.

Investments in health through the Global Fund have saved more than 44 million lives since 2002, revitalizing entire communities and improving economies.

Reverse the course of AIDS, tuberculosis and malaria

The efforts of communities, governments and global health partners have resulted in extraordinary progress in the fight against the three diseases.

Canada has been a strong supporter of the Global Fund from the very beginning, investing approximately C$3.69 billion since the Global Fund was established in 2002. These investments have had a major impact – not only saving lives, but also breaking down gender and human rights barriers to health, supporting the inclusion of marginalized groups in decision-making structures, and building resilient and sustainable health systems.

Canada is the sixth largest public donor to the Global Fund and has pledged CAD 930.4 million for 2020-2022, a 15.7% increase over its previous commitment. Canada also hosted the Global Fund’s Fifth Replenishment Conference in September 2016. Over the past two years, Canada has allocated C$125 million to the Global Fund’s COVID-19 Response Mechanism, supporting the scaling up of diagnostics, treatments (including medical oxygen) and elements of resilient and sustainable systems for health.

The community and civil society in Canada play a critical role in advocating for the global fight against HIV, TB and malaria and in strengthening Canada’s contribution to global health investments. The Global Fund Advocates Network (GFAN) Secretariat is partially based in Ottawa and works with advocates, activists and communities affected by the three diseases, as well as Friends of the Fund organizations.