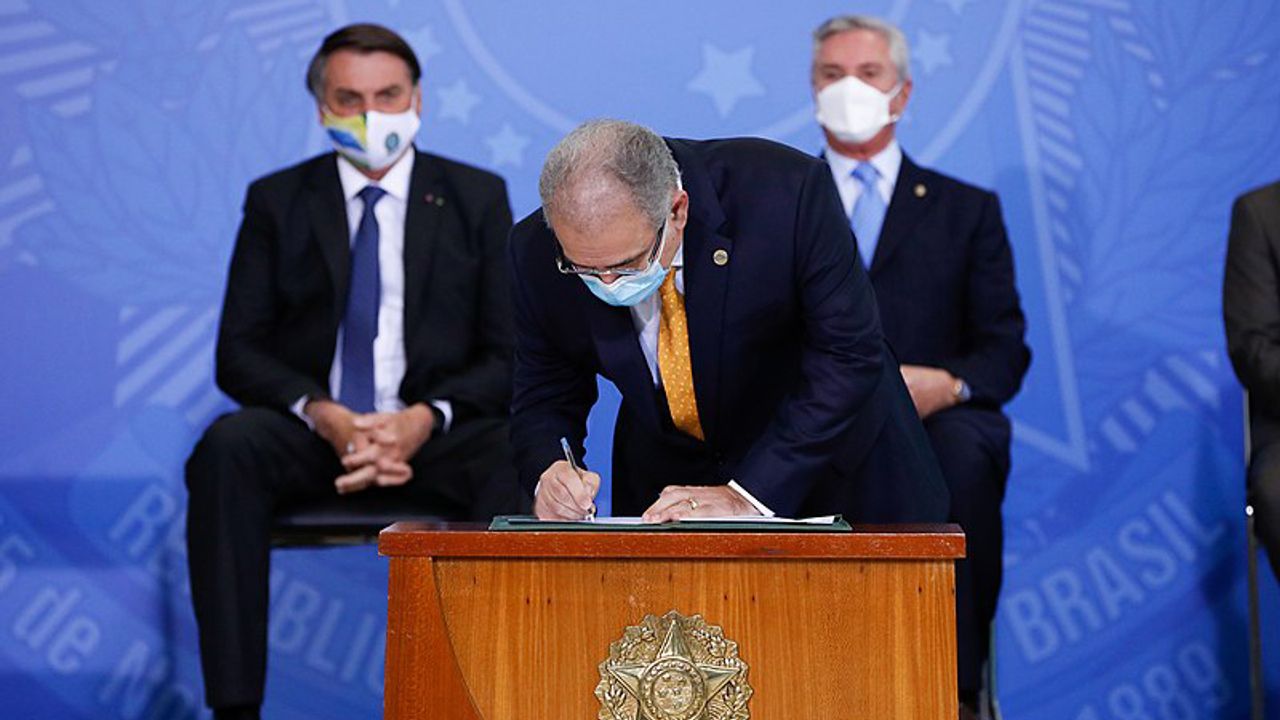 On April 17, the government of fascist President Jair Bolsonaro announced the end of the health emergency decree that began in February 2020, formalizing the shift towards removing all restrictions on the COVID-19 pandemic in Brazil.

In a nationally televised address, after admitting that the world is still “facing the greatest health emergency in history” and pretending to mourn “the victims and those who still suffer from the aftereffects of this disease “, Health Minister Marcelo Queiroga hypocritically declared that “thanks to the strength of the Unified Health System (SUS), we have saved many lives”.

The criminal implications of the Bolsonaro administration’s new decree were raised by epidemiologist Ethel Maciel during a discussion organized by the Oswaldo Cruz Foundation (Fiocruz). Maciel said: “We need to build the capacity of epidemiological teams and laboratories. The great concern to revoke the [health emergency] decree is that these structures will be closed.

With the end of mask mandates in all Brazilian states and the prevalence of the Omicron BA.2 subvariant in the country, the Brazilian government’s decision to end the health emergency may cause a new outbreak, as seen currently produced in the US, UK and other countries.

On April 14, the All for Health Institute (ITpS) reported that the highly transmissible BA.2 subvariant accounts for nearly 70% of COVID-19 cases. Less than a month ago, on March 19, 27.2% of reported positive tests were from the subvariant.

In light of this, several scientists and health experts have warned of the implications of ending the emergency decree.

On April 7, it was confirmed that the Butantan Institute had discovered the first case of Omicron’s XE subvariant in Brazil, which combines the characteristics of BA.1 and BA.2. On the 16th, the first case of recombination of the Delta and Omicron variants was confirmed in the state of Rio Grande do Sul. Richard Steiner Salvato, a specialist with the state’s genomic surveillance agency, stressed the importance of continuing to monitor the trajectory of these variants. Salvato said: “The case identified here has additional mutations, so we don’t know what impacts this recombination brings to the behavior of the virus.”

Nésio Fernandes, president of the National Council of Health Secretaries (CONASS), told the Piaui magazine: “With the cuts and the cessation of these investments, there will be a great demobilization of intensive care beds.” According to him, the unified health system did not collapse in February, during the Omicron wave, only because it maintained these beds, which will now be decommissioned.

Harvard University epidemiologist Marcia Castro pointed out Piaui the great regional inequality in vaccination and the fact that less than 40% of the Brazilian population made the first reminder: “We still have a lot of unvaccinated people, the number of cases is increasing in Europe, we have environments where the ventilation conditions are terrible. This message that ‘it’s over’ is very concerning.”

The ruling class campaign to demobilize all efforts to contain the virus is based on the narrative that after repeated waves of SARS-CoV-2 and the spread of the so-called “mild” Omicron variant, the pandemic becomes “endemic”. The term has been used by governments around the world as they declare an end to all control measures and cut resources needed to carry out treatment for patients with COVID-19.

A key part of this “herd immunity” policy is to cut funding for testing centers, eliminating the ability to predict the trajectory of the virus and prepare any kind of response, while hiding the true severity of the pandemic from view. population.

In the United States, where mandatory masking on public transport was dropped last week, the Biden administration has cut funding for free tests and vaccines for the uninsured, while criteria are being finalized. elaboration to remove tens of thousands of deaths from the United States Centers for Disease. Control account (CDC).

In the UK, the government of Boris Johnson ended the free distribution of tests earlier this month, and other essential measures in the fight against the virus have been abandoned since February 24, such as requiring the self-isolation for people who test positive. The real impact of BA.2 in the country is reflected in the near record number of hospitalizations and nearly 2,300 deaths in the past seven days.

In Brazil on December 10, after a hacker attack on the Ministry of Health’s website caused the counting of new cases, deaths and vaccinations to fail, Bolsonaro redoubled his offensive against all preventive measures. mitigation measures and against the introduction of vaccination certificates to control the entry of people from outside the country before the New Year and Carnival holidays.

In December, with the imminent approval of the vaccination of children aged 5 to 11, Bolsonaro incited violence against technicians from the Brazilian Health Regulatory Agency (Anvisa), responsible for the decision, and threatened to force parents to obtain a medical prescription to vaccinate their children. children. The federal government has delayed the campaign to vaccinate children by weeks, while governors, including from the self-proclaimed left, have unanimously said they will not postpone the mandatory return to school.

After the wave of Omicron variants receded in January-February, state governors, some of whom had been calling for an end to mandatory indoor masking since October, joined Bolsonaro’s efforts and ended mask mandates in March.

In the face of the campaign to allow the virus to spread and the recent announcement that the health emergency is over, the true meaning of the “endemic” narrative becomes clear: the population must accept a “new normal” of mass infections. , death , and suffering from a long COVID.

The Bolsonaro administration and the governors of each political party represent the interests of Brazil’s bourgeoisie, which sees the remaining mitigation measures as an unwelcome reminder that the pandemic is not over. Their goal is to ensure that workers remain in the workplace, even if they are infected, in order to maximize profits for big business.

We must oppose these measures which lack scientific basis. The history of the past two years shows that continued large-scale infection risks the emergence of new variants with increased virulence and resistance to vaccines. The COVID-19 pandemic will not be ended by decree, but only by a policy of global elimination of the novel coronavirus.

The actions of the Workers’ Party (PT) governors, who carried out economic and school reopenings hand in hand with Bolsonaro, show that the election of a new government of former President Luiz Inacio Lula da Silva will not provide no alternative to fight the pandemic, and indeed none of the pressing problems facing the Brazilian working class.

In April 2020, as Bolsonaro reaffirmed that no public health response should be implemented to fight the pandemic, Congress approved, with the support of all major parties, including the PT caucus, a multi-billion bailout package for large corporations, while a fraction of that amount was intended to provide limited economic relief to workers.

In opposition to the death policy of capitalist governments around the world, the working class must create rank-and-file committees within the framework of the International Workers Alliance of Rank-and-File Committees (IWA-RFC), with the collaboration of scientists and public health experts to implement all necessary measures to end the pandemic.

On May 1, the International Committee of the Fourth International will present a program to counter the ruling class’ strategy of war and death with a program for the elimination of the pandemic and an end to the imperialist war waged in Ukraine. We urge all workers in Brazil and abroad to assist this critical event.

Manchin: Reduced bill should focus on inflation and debt reduction