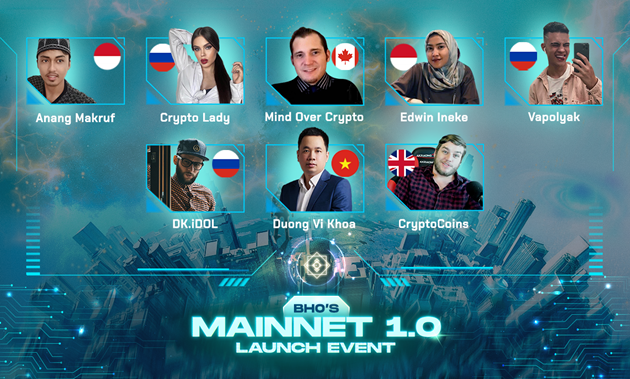 BHO successfully released Mainnet 1.0, with the presence of many famous global guests

A global guest list recently attended the BHO Project â€œMainnet 1.0 Launchâ€ live event on 12/30/2021. This event officially marks a new step for BHO in the blockchain and digital asset industry.

In addition, the event also brought together 8 influential figures in the field of blockchain globally. These are the investors and content creators who have millions of followers, namely: DK.Idol – Tiktoker and global investor with over 1.4 million followers; Crypto Lady – investor and Tiktoker with 500,000 subscribers; Freddie – a Youtuber specializing in crypto analysis and NFT, owner of the CryptoCoin chain with more than 387,000 subscribers; Nero – the founder of the KOL dApp Center network with nearly 100 million subscribers, also owner of the Mind Over Crypto Tiktok channel with over 300,000 subscribers; and finally, Vapolyak – an influencer in the field of NFT, crypto and entertainment with more than 233,000 subscribers.

2 other Youtubers from Indonesia also joined the launch event, Anang Makru (Tun channel) and Melissa Adhalia (Edwina Ineke channel) who both have hundreds of thousands of followers.

From Vietnam, Mr. Duong Vi Khoa, vice president of VIRESA Viet Nam, who is â€œquite familiarâ€ with the cryptocurrency community was also present at the ceremony. Despite being located all over the world, popular figures in the field attended the live broadcast to express their enthusiasm for BHO Mainnet 1.0 and send their best wishes to the project.

The BHO Mainnet 1.0 launch event took place live on the BHO Global Facebook page and Youtube channel, with over 6,000 viewers online. During this event, BHO officially presented the technologies used for Mainnet, shared the meaning and potential of the project ecosystem, as well as announced the next development roadmap with many products to be released in the future: Launchpad, NFT Marketplace Decentralized Exchange DEX and Wallet. The highlight of the event was when Mainnet 1.0 was officially launched, marking the milestone that the BHO token became the project database.

Speaking at the event, Mr. Nhat Phan – co-founder and CEO of BHO Project – said, â€œWith a blockchain network, Mainnet is the starting point. The launch of Mainnet version 1.0 marked the official entry of BHO into a new era of the blockchain industry, with the explosive development of dApps such as GameFi, Web 3.0 and DeFi 2.0 â€.

Find out about hot men and women on our very own Puma dating site.