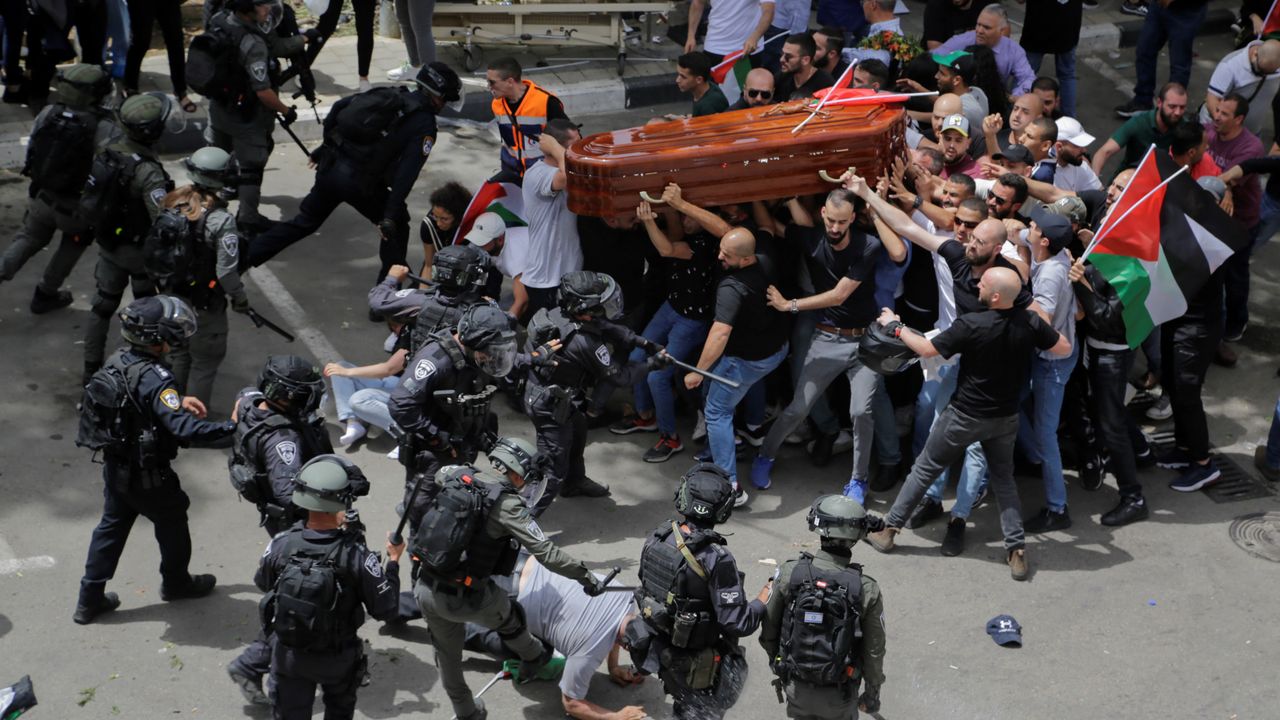 The courts’ reasoning for these blanket bans was fear that the protests would involve anti-Semitic slogans, incitement to violence and/or acts of violence. Last Friday, the Higher Administrative Court justified its confirmation of the bans on the same baseless grounds. According to the court, his prognosis was justified on the basis of previous events and that those recording the protests had not distanced themselves sufficiently from people with anti-Israeli or anti-Semitic views.

Over the weekend of May 14 and 15, more than 1,100 police officers were mobilized to enforce the bans by any means possible. Several arrests took place during small spontaneous demonstrations.

The ban on demonstrations is a fundamental attack on freedom of assembly and expression. It contradicts constitutional principles and is purely politically motivated.

On May 15, Palestinians around the world commemorate the so-called Nakba (catastrophe). During the founding of the State of Israel, Palestinian towns and villages were destroyed in a wave of violence beginning in 1948 and an estimated 800,000 Palestinians were displaced. To this day, the majority of the Palestinian population in the occupied West Bank, the Gaza Strip and in refugee camps in Lebanon, Jordan and other countries live in abominable conditions, subjected to constant brutal oppression by the from the Israeli state.

This year, the Nakba was marked by the murder of Palestinian-American journalist Shireen Abu Akleh. The well-known Al Jazeera reporter had covered the Middle East region for decades. On May 11, she was assassinated by an Israeli sniper with a bullet to the head as she stood at a roundabout wearing a clearly marked Press helmet and jacket. She had reported on constant raids by Israeli security forces in the West Bank city of Jenin. The circumstances of his death indicate a planned murder.

When mourners carried his coffin out of St. Joseph’s Hospital in East Jerusalem the following Friday, they were attacked by Israeli security forces. Troops tore down Palestinian flags and brutally beat the pallbearers, nearly knocking them off the coffin. Al Jazeera broadcast the shocking scenes live as soldiers used rubber bullets and stun grenades against crowds gathered outside the hospital morgue. The incident sent shock waves around the world.

The claim by the Berlin police that the ban on demonstrations was intended to prevent anti-Semitic slurs and riots is clearly a pretext. The ban also applied to an event scheduled for Friday night by Jewish Voice, a Jewish organization that campaigns for Palestinian rights.

The group Palestine Speaks criticized the ban as an “attack on freedom of assembly and expression” which “alarmingly opens the door to unlimited state repression against any opposition in Germany, whether for the human rights of Palestinians, anti-racism or refugee rights”.

In the Berliner Zeitung, lawyer Ralf Michaels argued that the bans “would pervert the fundamental right to freedom of assembly”. He considered the police’s explanation that they wanted to prevent violence by “groups of people of Muslim origin” to be unfounded.

The ban was clearly directed against any criticism of Israel. Germany has long been an important ally of the Israeli government and explicitly supports its brutal oppression of Palestinians.

It should be noted that the Berlin Senate – an alliance of the Social Democrats (SPD), the Greens and the Left Party – had organized to fund a “Solidarity Against Hate” rally originally scheduled for May 15. The event, which was later canceled following massive public criticism, was intended to legitimize the Israeli government’s brutal policies. The flyer posted on social media featured a donkey with the Amnesty International logo on the back. The human rights organization had criticized the apartheid policy of the Israeli government.

Both the ban and the verdict must be seen first and foremost in the context of the war in Ukraine, the growth of German militarism and growing popular resistance to both.

Just a week before the ban on demonstrations in Palestine, the Berlin police, at the request of the Red-Red-Green Senate, issued an order banning Soviet flags from commemorations of the anniversary of the liberation from fascism. Among those affected were survivors and relatives of victims of the Holocaust and the Nazi war of extermination as well as opponents of the war who gathered at memorial sites and historic buildings.

Once again, reality has been turned upside down. The banning of Soviet flags was justified by possible “conflict potential” or even “glorification” of the war in Ukraine. The real reason was to criminalize commemorations of the greatest crimes in human history, at a time when the German government is pouring record sums into military rearmament and sending tanks and heavy artillery to Ukraine to the war against Russia.

The Berlin Senate and its police take a completely different stance on far-right protests. They are not only allowed, but outright supported. Coronavirus deniers and supporters of far-right parties have been able to freely spread their inhumane ideology in defiance of all mitigation measures. They were protected by the security authorities. Today, far-right pandemic policy is official government policy.

Also noteworthy in this regard is an incident in Zwickau, Saxony, where the city had planned an intercultural festival called “Zwikkolör” in the main market square on May 14. The festival was canceled at short notice after the administrative court in Chemnitz approved the organization of a far-right rally by the “Volksstimme Bürgerbündnis Zwickau” at the same location. The court argued that the freedom of assembly (of right-wing extremists) guaranteed by the German Basic Law took precedence over an intercultural event having the “character of a festival”.

The ruling class promotes the far right and suppresses left-wing protest because it fears resistance to militarization and social cuts. The war in Ukraine is linked to a dramatic deterioration in the living conditions of the broad masses throughout the world.

Last month, the World Bank estimated that food prices would rise by 22.9% this year, mainly due to an increase in world wheat prices. The FAO Food Price Index, which tracks monthly changes in international prices of foods such as sugar, dairy, cereals and vegetable oil, is nearly 30% higher than in April 2021.

Workers are under constant threat of pay cuts, job cuts and social attacks. The retirement age is to be raised to 67 by 2029, and there are already new demands to raise it to at least 70.

Massive resistance is growing against these developments. To justify its ban on demonstrations, the Berlin court explicitly cited the “high level of mobilization” on Nakba Day. He was referring to the fact that last year more than 10,000 people took part in a demonstration on Nakba Day to protest Israel’s deadly airstrikes on Gaza. All demonstrations against war and oppression must be stopped at all costs.