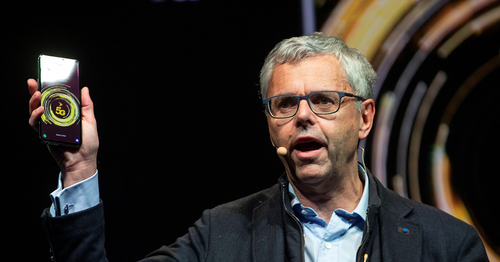 A Japanese tech company has a French CEO

Michel Combes, a graduate of France’s elite Ecole Polytechnique, has three decades of experience in the telecommunications industry.

When Softbank COO Marcelo Claure announced his departure from the Japanese tech conglomerate, it made headlines around the world. Less noticed was the simultaneous appointment of French businessman Michel Combes, 59, as CEO of Softbank Group International (SBGI).

Combes, a telecoms specialist, is approaching the inner circle of President Masayoshi Son. Combes had been chairman of the SBGI subsidiary since April 2020. He now oversees the holding’s international investment portfolio. “I am confident that Michel Combes and the talented team at Softbank will continue the excellent work we have underway,” Son said.

The energetic new CEO, a sports car enthusiast, has known his Japanese boss for many years. It was Son himself who hired the first Combes. When the French executive joined Softbank subsidiary Sprint in 2018, he moved to its Kansas headquarters, settling in a house where Son had once lived.

Combes, a graduate of France’s elite Ecole Polytechnique, has three decades of experience in the telecommunications industry. Prior to Sprint, he held several CEO positions with multinational telecoms company Altice, equipment manufacturer Alcatel-Lucent, Télé Diffusion de France and Vodafone in Europe. At the beginning of his career, he was technical adviser to the French Ministry of Transport.

Life at the top of the industry has had its turbulence. When, in 2015, he organized the sale of Alcatel-Lucent to his Finnish rival Nokia, his announced premium of 14 million euros (15.9 million dollars) “shocked” the Minister of the Economy, a certain Emmanuel Macron, and the bonus has been halved. That didn’t deter him from merging and acquiring: he was part of the Sprint/T-Mobile deal announced in 2020 and celebrated the union of Televisa-Univision, the new Spanish-language media company, and part of Softbank’s portfolio.

Today, the globetrotter Combes sits on various boards of directors in the orbit of the Japanese conglomerate: WeWork, Sofi Technologies, One Web. He also oversees Softbank’s investments in French startups such as Jellysmack, Contentsquare and Sorare.